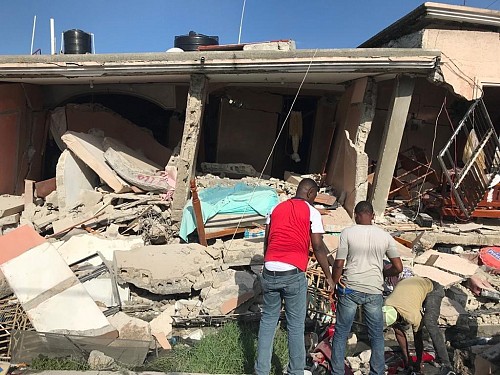 On Saturday morning, August 14, a 7.2 magnitude earthquake struck the southwest of Haiti, devastating the cities of Les Cayes and Jérémie. As of Saturday afternoon, over 200 people are reported dead, with many more missing, injured, or trapped in the rubble. This follows a month of disorder and unchecked violence after the assassination of President Jovenel Moïse on July 7…

Although many lines of communication are down, Matushka Rose Legouté, currently visiting Miami, was able to relay information from the diocesan Haitian missions:

This morning I was awakened by a phone call from Reader Etienne, who told me that a powerful earthquake had just taken place. Many of the things in the house were knocked over and broken. A few minutes later, calls began flooding in from across the country to give me news. It was then that I understood the magnitude of the earthquake, and was informed that the whole south of the country is devastated.

I called Fr. Pierre Laguerre straight away to get news. I could not reach him, so I contacted Fr. Jules Dumé to see if he could get in touch with him.

I received word of Fr. Pierre through Reader James in Léogâne, one of several people whom I had asked to get in touch with him. I found out that his house has collapsed, it is unfortunate. Our Church of St. John of Shanghai & San Francisco in Les Cayes has remained intact, though we have been told that several houses in the area of ​​the Les Cayes church have collapsed. As for the families of Les Cayes, I cannot reach them. People are in panic and great stress, and are afraid of the aftershocks being felt from time to time.

Information confirms that the city of Les Cayes is on its knees. At home, the house is cracked. The entrance, that is to say the gallery, the roof is collapsed, the ceramics are all mounted, I have been informed that there is water coming up from the basement in several places in the city, many hotels, multi-story houses have collapsed. Part of the local prison has collapsed and prisoners have escaped. A lot of water has risen to the surface, and some churches in the city have also collapsed. The damage is considerable. All this comes on top of the various problems we face: insecurity, economic, political problems, the recent assassination of the President of the Republic. The challenges are colossal for the Haitian people!

I am told that in Jérémie, in Grand’Anse, there is a disaster, in Fonds-des-Nègres there is already a tsunami. I send further information as it becomes available. I have news from the parishes of St. Moses in Fontamara, Sts. Peter & Paul in Léogâne, Nativity of the Mother of God in Port-au-Prince, St. Nicholas in Cap-Haitien, St. Augustine in Jacmel: the churches have remained intact, thank God! The families of our clergy are also doing well, thank God!

"Your prayers are very important for Haiti and the families of the Parish of St. John in the south of the country.

With love in Christ,