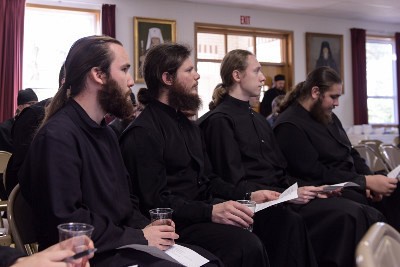 Donors like you are helping arm our priests to battle the relativism in the world and the rising renovationism in the Orthodox Church!

It’s a mad, mad, mad, mad world out there. And it would take a special kind of naiveté to think that the madness is not touching our beloved Orthodox world. For example, there are professors in Orthodox seminaries actually say that saints like St. Mary of Egypt never lived. Concelebration with Catholics in some circles is considered all but a foregone conclusion. And that’s just the tip of the iceberg.

The problem for our dear ROCOR has been something reflected in the words of Bishop Amvrosy of Geneva of blessed memory. “Our priests,” he said, “are not scholars. How could they be? They’ve been at the front lines, battling for the souls of their flock. They are foot soldiers.”

But foot soldiers, when faced with the deceptively wise of this world, can be left speechless. And what will their flock do then? Will some of them be lured by the crafty speeches of wolves in sheep’s clothing?

It was with that in mind that the FFA reached out to you before last September, asking you to help fund a full scholarship for a new and exciting project, the long-awaited MDiv program at our beloved Holy Trinity Seminary. And you responded enthusiastically, becoming sponsors of a truly amazing endeavor – the Vladimir Galitzine Scholarship, which allowed one student the freedom to apply himself to the rigorous academic requirements of the MDiv program, as well as the equally challenging spiritual requirements of a full liturgical calendar.

Thank God, you no longer need to worry about the dearth of scholar-priests. With your help, ROCOR is finally equipping a new kind of priest. Not the simple foot soldier, but a new kind of warrior-scholar, equipped with the best knowledge of the past, seasoned with the best of today’s advancements and discoveries.

With your help, ROCOR is finally equipping a new kind of priest.

You would have been thrilled to see it – a class of seven people, from their early twenties to their sixties, all compatriots-in-arms, eager to learn for their own benefit and the benefit of their church. They grappled with everything from postmodern philosophy to the latest linguistic discoveries in ancient Near Eastern Languages. They came up against their own prejudices and the prejudices of the modern world, and they found answers to questions they never thought to ask.

And without you, at least one of them would have been denied these riches.

Add to this the ascetical element of living in a monastery, working alongside the monks, and attending the richest liturgical experience our Church has to offer, and our budding warrior-scholars have everything necessary to build their physical and spiritual strength, as well as their intellectual capabilities.

Finally, ROCOR can feel confident to enter the public square to battle the growing modernism, ecumenism, and renovationism in Orthodoxy and the world.

By continuing to support Jordanville through the FFA, you are ensuring that our Church will not only weather the storm of modernity, but it will prepare priests who will take the battle to the world, saving the souls of their flock and attracting many others to the Church of Christ by the brilliant light of their example. It is a light so lovely, that even the non-Orthodox will want to know, from the bottom of their hearts, the source of that light.

You are making this light shine much brighter! We hope you will continue to do so with your continued support of the MDiv program at Holy Trinity Seminary.