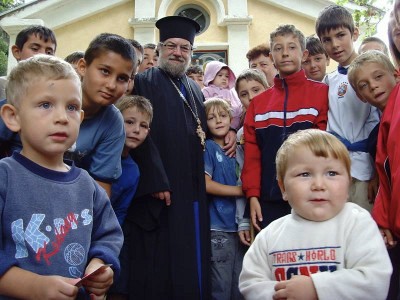 “People think the war is over in Kosovo…. It’s not!” – said Fr Nektarios, almost crying on the phone. This conversation happened a few weeks after Fr Nektarios’s return from his latest trip to Kosovo. He went there to deliver the aid you sent to your starving brothers and sisters.

Thanks to your help, between 350-400 people in Kosovo received money for food and clothes. We asked Fr Nektarios to deliver the money to the people personally, so we knew exactly where it was going and for what reason.

Archimandrite Nektarios Serfes is a ROCOR-educated and ordained priestmonk.  He lives and serves in Boise, ID, where he also administers the Decani Monastery Relief Fund he created (DMRF). He created DMRF 14 years ago to help the Serbs who refused to leave their motherland – Kosovo – after it had been taken away from them by Albanian Muslims who declared independence after ethnically cleansing this originally Orthodox land.

The humanitarian crisis there is horrific, said Fr Nektarios. Livestock, farm machinery, and firewood are stolen daily. Serbs are threatened with machine guns if they try to protest. Yet they still want to live in their native land.  They try to be self-sufficient, but they need help.

“When I told them this help came from the Russian Church in America, they cried with happiness. They were so happy that someone – anyone – cares for them.”

“When I told them this help came from the Russian Church in America, they cried with happiness. They were so happy that someone – anyone – cares for them.”

Thanks to your generosity, Fr Nektarios was able to provide between 350 and 400 people with money, as well as potatoes, flour, sugar, and firewood. All the provisions had to be bought at a specific place that was more or less accepting of Serbs and Orthodox Christians – hours away from their villages.  Firewood had to be ordered from Germany, because even villagers who own their own forests cannot chop wood, for fear of being shot by thieving occupants.

The list of their daily sufferings and everything Fr Nektarios has endured would take more space than this newsletter. But here some wonderful news: because of kind donors like you, all these people, as well as parishioners of six different churches and four monasteries in Kosovo, have had food to eat for months now.

When we wrote to you about “the Kosovo cabbage diet” – where families have nothing but cabbage to eat for months, you did not remain silent. You sent money, prayers, and kind words that warmed our brothers all the way in Kosovo. Thank you.

“I have food because of you. I love you and I thank you…’ this is what they asked me to tell the benefactors,” said Fr Nektarios.

“‘I have food because of you. I love you and I thank you…’ this is what they asked me to tell the benefactors,” said Fr Nektarios.

Thank you for caring for the people forgotten by the whole world. Our Lord will remember you for not forgetting the horrific sufferings of these people. Thank you so very much.