Just like any other 8 y.o., Juliana from Ladysmith, BC, loves presents and parties. For her own birthday this year, she asked her mother if she could do something special.

Juliana wanted her friends to come to a party with a bigger meaning and an emphasis on someone other than herself. She invited some of her friends to bring 12 non-perishable food items to her party, rather than a gift for her.

Once ‘the groceries’ arrived, mother and daughter set them up in a large room, to ‘play store’.    Each girl was given a bag, and had to ‘shop around’ to fill their bag with the collected items.    This helped divide and share the items evenly.  They later took the food to a local food bank.

Juliana also asked her friends for a donation for the orphans in Haiti. She had heard about the orphans at the Orthodox Mission in Haiti at her parish, and felt compelled to help them: “Because it would be sad not to have a mother and father.”

“The girls embraced it and what happened amongst these non-Orthodox girls, some of whom do not even belong to a Church, was completely Christian.   Beautiful, to say the least.   I feel blessed to have been a witness,” said her mother Irena.

Juliana and her friends collected $36.11 for the orphans and sent the money to the Fund for Assistance. What a beautiful way to teach children to care for others! Thank you, Juliana! 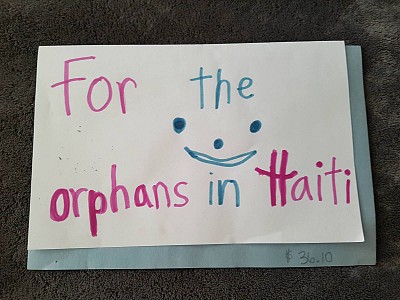