It was all really good news for the Opyoke family: promotions for both deacon Fr. Thomas (Holy Myrrhbearers Mission in Harrisonburg, VA) and matushka Elizabeth, a down payment on a new house and best of all – a second baby.

And then the problems started: Matushka had to be hospitalized seven times during her pregnancy and was put on a liquid diet. Later they found out she had long-time complications from Crohn’s disease in her teen years.

By giving her a promotion, her employer somehow robbed Matushka of the paid leave she had spent three years saving up and left her ineligible for short-term disability.

In the meantime, because of Matushka’s condition, their son was born prematurely, and had to spend two weeks in the hospital with breathing problems.

Matushka had an operation to remove the obstruction in her bowels and nearly bled to death during the operation.

“We had lost half of our income…”

On top of that, because of Matushka’s employer’s negligence, the family was out of half the family income during a most difficult time of illness and a new baby.

Today everyone is healthy – glory be to God!

The hospital stays, sickness, a mortgage, and childcare payments, student loans and car payments had left the family in a deep financial hole.

Even though the two parents both work full-time, they were struggling every month. 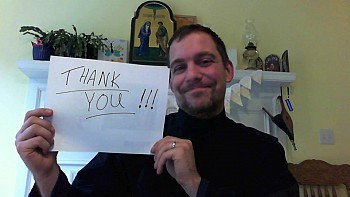 “It came to the point where I try not to eat much, so I can save the food for my wife and kids,” said Fr. Thomas to FFA.

But then thanks to your generosity, we were able to collect over $14K for the Opyoke family.

“Words cannot express how relieved we are. Thank you for donations, prayers and continued support to the Fund for Assistance!” said Fr. Thomas.

See the heart-wrenching video “Fr. Thomas says Thank You!” on our Facebook and YouTube channel. He recorded it for you.

Update: Just as Matushka Elizabeth’s debts were paid off, Fr. Thomas had to undergo an operation, and totaled his car in the snow. Please pray for the family who are going through a difficult time!