Four days of non-stop inspired fellowship of brothers and sisters in Christ went by as one moment. The conference brought together young people from North America’s western shores (California and Alberta) to the eastern shores (Halifax and Florida) of North America. For some this was a first experience with Orthodox conferences, while for others it was an annual event, awaited with much anticipation from the year before.

The conference participants stayed at the comfortable Marriott Downtown Eaton Centre Hotel, where in the warm atmosphere of friendly fellowship, the first meeting of young people took place. Formally, the conference began on December 24 with morning prayers and a tasty breakfast. Then, the youth participated in workshops, where important Orthodox subjects were discussed with members of the clergy. In the evening, His Eminence Archbishop Gabriel of Montreal and Canada led the faithful in the celebration of the vigil, to which the wonderworking icon of the Kursk-Root Mother of God “of the Sign” was brought by Bishop Nicholas of Manhattan. Next day, both hierarchs served the Divine Liturgy in honor of St Herman of Alaska.

Talented young choir members made the service quite beautiful with their mellifluous singing. Archimandrite Luke, abbot of Holy Trinity Monastery in Jordanville, NY, delivered the main presentation of the conference about the reburial of the remains of Bishop Constantine (Essensky). The final day ended with a beautiful banquet arranged and served by the Holy Trinity parish sisterhood, followed by the traditional talent show.

Bidding their farewells, the participants exchanged their contact information so that via social networks they can stay in touch until the next conference, which - God willing - will be held in 2015 in Lakewood, NJ. 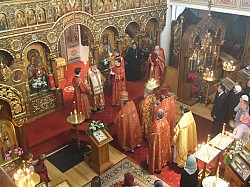