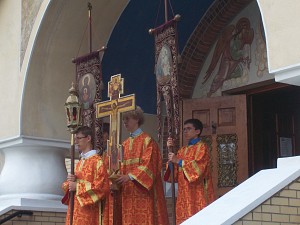 Over the summer the Fund for Assistance sponosred a three-week summer youth program at Holy Trinity Monastery in Jordanville, NY.  The goal of the program was to introduce young men to spiritual life, to teach discipline and independence and to awaken their interest in the deep life of the Church and the seminary.

After the completion of the camp, Ephraim Willmarth, Program Coordinator wrote this report:


“Nine boys ages fourteen to seventeen participated, which was a larger group than the previous year.  They came from both nearby New York and New Jersey, and from far and wide, including Virginia, Michigan, Colorado, and Ontario, Canada. They lived at Holy Trinity Monastery for three weeks, keeping a schedule similar to that of seminarians.  They prayed with the monastic brotherhood daily, served in the altar, shared common meals, and helped at various monastery obediences.  In addition, there was time for play, with sports, swimming, and official outings such as a trip to underground caves and a ride on a historic railroad.

The boys had the opportunity to become familiar with the members of the monastic brotherhood.  They listened to stories about several of the notable monks who have reposed, as told by Protodeacon Victor Lochmatow, who knew them all personally.  The boys participated in discussions and lectures daily about spiritual, moral, and practical topics relevant to their lives.  These were led by visiting white clergy and monastic clergy from the monastery.

In spite of somewhat different cultural backgrounds, and the fact that most of these boys had never met each other before, the group was united by a desire to be at Holy Trinity Monastery, and by their common faith. They made a manly effort to keep the schedule and did diligent work.  Members of the brotherhood had only positive comments about their willingness to work and their good behavior in the altar.  The boys themselves commented positively about the program, and expressed a desire to return next year.”

“The summer life is free and clear
The time we spent is always dear
And with experience they take
the boys begin a brand new day.
Time fles by fast and people change
However in the very end
A few weeks spent is all it takes
To cleanse your soul and smile again.”