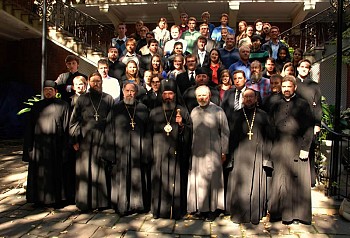 On October 2-3, 2010, with the blessing of His Eminence Metropolitan Hilarion, First Hierarch of the Russian Orthodox Church Outside of Russia, and His Eminence Archbishop Justinian, Administrator of the Patriarchal Parishes in the USA, a youth symposium dedicated to the 90th anniversary of the Russian Church Abroad was held in New York.  The Fund for Assistance to ROCOR was one of the sponsors of the event.

Before the symposium began, the participants and guests gathered at the Synodal Cathedral of Our Lady of the Sign, where Archbishop Justinian and His Grace Bishop Jerome of Manhattan, along with clergymen of the Russian Church Abroad and the Patriarchal Parishes, performed a moleben to the Holy New Martyrs and Confessors of Russia.

In his keynote address, Vladyka Justinian noted that “the establishment of the Russian Church Abroad was a great event, and, as all great things, it must be understood properly.” His Eminence discussed the historical aspect and meaning of the Russian Church Abroad: “The events following the October Revolution of 1917 gave rise to a wave of tribulations, which began to crush the Church and the people by force. Several million Russians found themselves outside of the borders of their homeland. Departing on one of the last ships from Sevastopol for Constantinople (Istanbul), the clerics accompanying a large contingent of refugees began to ponder how to organize church life for those who were compelled to leave their homeland… It was necessary to preserve both the unity of the Russian diaspora and maximal autonomy for the Russian Church, and at the same time, finding themselves on the canonical territories of another Local Church—the Ecumenical Patriarchate—not to violate canon law. Think of the courage the Russian hierarchs needed to make sense of everything and to declare: ‘We must establish an ecclesiastical administration.’ It would have been easier, without thinking, to simply run and say that now their responsibility before the people, before the Church, had ended… They could have simply merged with the clergymen of other canonical Churches—Greek, Serbian, Bulgarian… The laity would likewise have submitted to the spiritual leadership of the Ecumenical Patriarchate, or the Serbian Church. And if 90 years ago, the Russian Orthodox Church Outside of Russia had not been created, then very rapidly—within twenty or thirty years—nothing would have remained of the Russian Orthodox spirit. The Russian Orthodox Church would have dissolved among other jurisdictions. But the hierarchs did not follow the path of dissolution into the diocesan structures already in place, but tried to prove to Universal Orthodoxy that it was possible to exist independently, as a separate jurisdiction—the ROCOR. They took a great risk, a great, bold step.”

The participants of the symposium also heard lectures by Protopriest Alexander Golubov of St Nicholas Patriarchal Cathedral, “From Sorrow to Joy. The Historic Path of the Russian Church Abroad,” and by Priest Serge Ledkovsky, Deputy Rector of St Vladimir Memorial Church, “ROCOR: the Path from the Past to the Future.” The speeches sparked broad discussion and many questions

Summarizing the first part of the symposium, Archbishop Justinian noted that the youth of the Russian diaspora and the Patriarchal parishes, even before historians and specialists, put forth the initiative of making sense of the historic conception of the process of ROCOR’s development and again emphasized the fact that “the creation of the Russian Church Abroad was born of the greatest spiritual and canonical creativity.”

The Orthodox youth, who had come to the symposium from various states, had the opportunity to ask questions of Vladimir Safronikov, member of the Representation of the Russian Federation to the United Nations, who told them about the work of the Russian Mission and of real problems facing the world today which evoke conflicting interpretations.

On the first day of the symposium, its participants had a lively discussion of how to preserve the best aspects of the Church Abroad and how to make use of it in their efforts today while adapting them to contemporary life.

One participant, Andrei Muraviev, said “The main purpose of this symposium was to gain new knowledge of our past and look to the future, the exchange experiences, and possibilities of clergy-youth contacts.”

Igor Kochan said “We need such events, and I am happy that they are happening together with ROCOR, where so many years of experience in youth ministry have been accumulated. That is why our Patriarchal Cathedral’s youth group is glad to participate in this symposium and hope to work together in the future.

“Youth work is especially important today, when many students come to the US. Often they have nowhere to go at first, and have little advice. This separation among today’s Russian emigres is palpable. Uniting youth on the basis of the Russian Orthodox Church is very important, and we are working on it together and hope to find a platform to connect non-church-going youth with young people who go to church, mostly by informally bringing them to church. There are a great many such young people in New York now.”

Nikolai Grokholsky: “Such meetings and events are crucial. It would be interesting to meet with representatives of the Church Abroad and learn more about its history. I think that just such joint efforts between the youth of ROCOR and the Patriarchal Parishes are very beneficial.”

Ekaterina Bozhko: “I found the lectures interesting. I would like to participate in such joint youth events more often. We could have trips, sporting events, picnics together… The main this is that this unites us and strengthens our bonds.”

Later that day the symposium members prayed at all-night vigil at St Nicholas Patriarchal Cathedral, where the Pochaev Icon of the Mother of God was brought from Holy Trinity Monastery in Jordanville This icon was brought out of Russia in 1920. After the service, the ROCOR and Patriarchal clergymen and youth, along with Vladyka Justinian and Vladyka Jerome, continued their discussions at a trapeza.

The central event of the second day of the symposium was Divine Liturgy, at which Archbishop Justinian and Bishop Jerome officiated. After the service, the young people were treated to a trapeza prepared by the Synodal Cathedral Sisterhood.

Summarizing the event, Fr Andrei noted the importance of making sense of the historic event which gave rise to the Russian Church Abroad far from the Homeland. The Youth Department’s Vice President noted that today, as 90 years ago, the main task of Orthodox youth must be missionary work in its various forms.

“Over fifty people participated in the symposium. We are glad to see young people from Brooklyn participate in such an event for the first time. This youth is ‘new’ to the life of our Church, that is, those who came in the last ten years or so. The special mission of the Synodal Youth Department is to attract such youth to church, who, unfortunately, is slowly dispersing among American society. Some of them were born in and came to the US as little children. They have not developed a sense of preserving and defending their national identity in various forms (which is characteristic of the Church Abroad).

“I think the symposium went well. I would like to thank the Fund for Assistance to the ROCOR for their support. It is important and vital for our youth to develop and continue the traditions of missionary work of our fathers and grandfathers.”